This article describes how to build an app from your configurator.

Written by Annette
Updated over a week ago

Building an app consists out of 5 steps:

1. Layout & Settings: set up all artwork, colours and texts

4. Build: submit the build to the queue

5. Test: download a test version of the app to check your build

After all 5 steps have been completed, you will be able to download the final version of the app to submit to the stores.

Each of the 5 steps are detailed below.

Image guidelines and required formats can be found in the artwork guidelines.

Strings are texts that are shown in the app. The strings that can be edited at this point, are all used in the selection screen, before any event is installed. The event strings can be configured within each event.

You can select one of the default languages, and optionally, change the texts. Please note that any changes you've made in a certain language are lost when you select another one!

Here you can set whether you want to see person images and company logos in lists. In case a photo or a logo is not uploaded, a placeholder will be shown.

If you uncheck these option(s), none of the items in the respective list will have a photo, logo or placeholder, even though you might have added them in the data editor. It is therefore advised to only switch this off if you're not adding any person photos or logos at all.

Here you can add custom configurations, that are generally not applicable for most conferences. In case this is needed for your app, we'll let you know how to add it here.

One Signal is the platform used for sending push notifications to devices with the app installed. In order to integrate with the app correctly, the Sender ID (Google) and App ID (One Signal) keys have to be added.

How these keys should be generated, is explained in another article. Here you only have to copy the values:

In order to allow Google login through My Congress, the client keys for iOS and Web have to be added. They can be found in Google's developer console under Credentials. Creating the keys is explained in a separate article. Here you just have to copy the values:

Select Add later if you don't have the OneSignal or Google keys yet. Push notifications or Google login will then not work, but you can still test the rest of the app.

After creating the certificates of the test version, you will know what to fill in for each of the fields below.

In this step, you can choose whether you want to create the screenshots needed for submission. To do so, tick the box and select the event from which to take the event screenshots. Please note your build takes longer to finish if you're creating screenshots, so only check this when you're doing the final build before submission.

Next, submit your build by clicking Submit build. The build will be added to our queue. It takes up to 30 minutes before your build is complete. When the build is ready, you will see green checkmarks and you can continue to the next step.

In case there are errors, try to solve them yourself or contact us if you can't figure out what's wrong.

To test the app, scan the QR code with an iOS or Android device. A page opens where you can click to install the right build for your device. 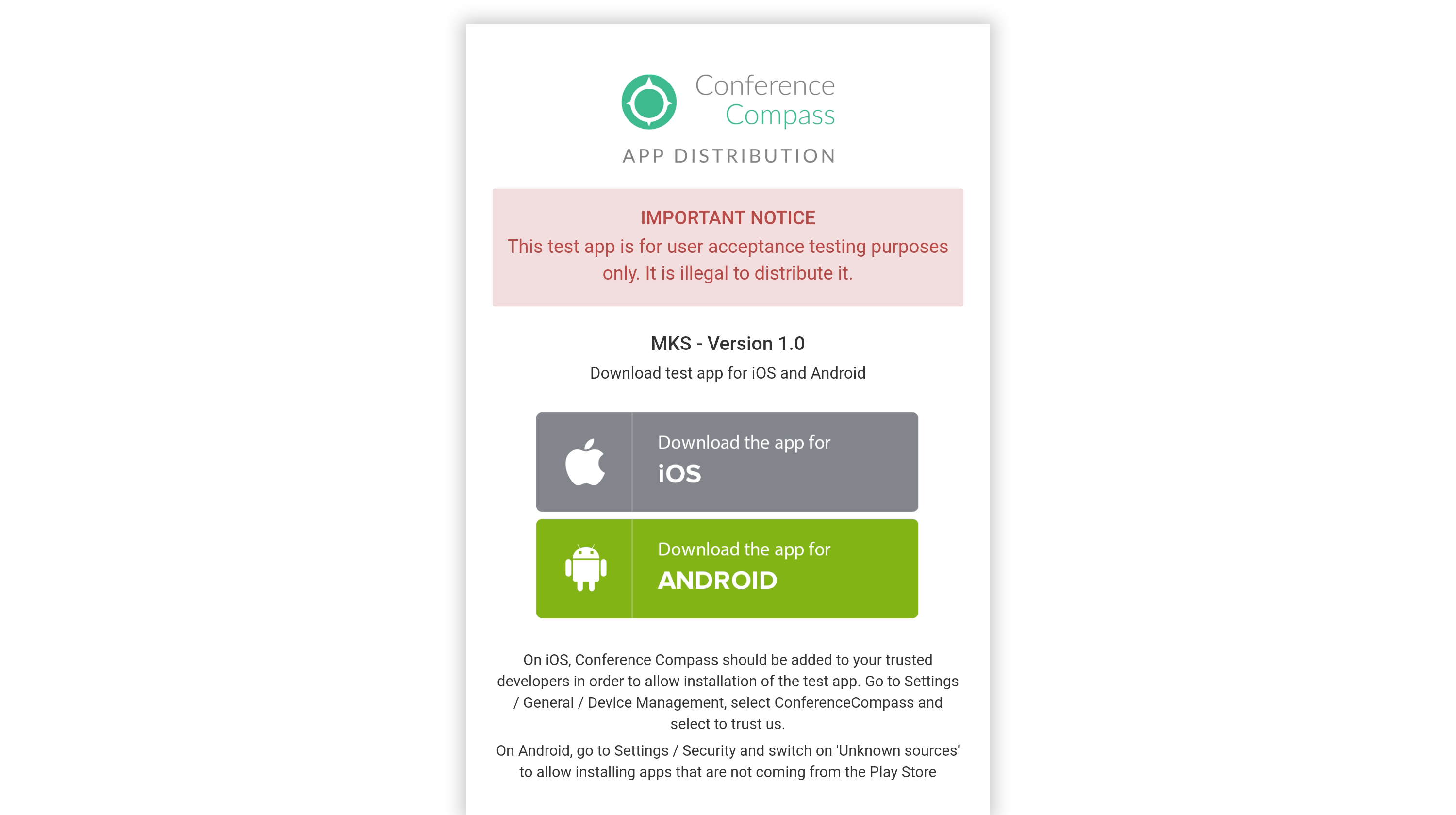 On iOS, Conference Compass should be added to your trusted developers in order to allow installation of the test app. Go to Settings / General / Device Management after installing the app, select ConferenceCompass and select to trust us.

On Android, go to Settings / Security and switch on Unknown sources to allow installing apps that are not coming from the Play Store.

When the app has been tested, you can tick the checkbox and finish this last step.

Finishing and creating the submission files

After finishing all 5 steps and testing your app, you will be taken to the starting point in App builds page, where you will find details of the last completed version, including the QR code for the test app and the files that can be downloaded to be submitted to the App Store or submitted to the Play Store. If ticked in the build, you can also download the zip files that include the screenshots.

The properties this app was built with, such as the version numbers or colours, are shown when clicking View build properties.

See below on which versions of the mobile Operational Systems our app runs:

Runs on iOS/iPadOS 10 or later

Runs on Android 5 or later

Did this answer your question?